Here are excerpts from Cut’s full timeline of the whole ordeal.

January 22: Racist, homophobic letter arrives at Empire set
Less than a week before the attack, Smollett receives a racist and homophobic letter containing white powder at the Fox studio where Empire is filmed. (This letter later leads some to believe the attack was premeditated.)

January 28: Smollett is attacked
According to initial reports, on Monday evening, two white men wearing ski masks approach Smollett outside of a Subway in Chicago, where they beat him up, pour “an unknown chemical substance” on him, and put a noose around his neck. Per TMZ, the men also call Smollett “that f**got Empire n*****” and yell, “This is MAGA country.” (Smollett is black and openly gay.)

That night, Smollett checks into Northwestern Memorial Hospital, where he is reported to be in “good condition.”

The Chicago Police Department releases an image of the two “potential persons of interest,” as captured by a nearby security camera.

Smollett’s family condemns the attack in a statement, saying, “To be clear, this was a racial and homophobic hate crime.”

February 1: Smollett makes first comments following attack
Smollett breaks his silence in a statement to Essence, saying, “My body is strong but my soul is stronger.”

February 13: Two men are arrested
CPD arrests two men on suspicion of carrying out the attack against Smollett. They are later identified as Nigerian brothers Olabinjo Osundairo and Abimbola Osundairo, who have connections to Empire. (In 2015, the former appeared as an extra.)

February 14: Good Morning America interview and the “potential persons of interest”
Smollett visits the Good Morning America studio on Valentine’s Day, where he gives his first in-depth interview about what transpired the night of the attack. At this point, some were starting to question the validity of Smollett’s account, as well as why he was apprehensive about giving his phone to the police, all of which Smollett addresses on the show. 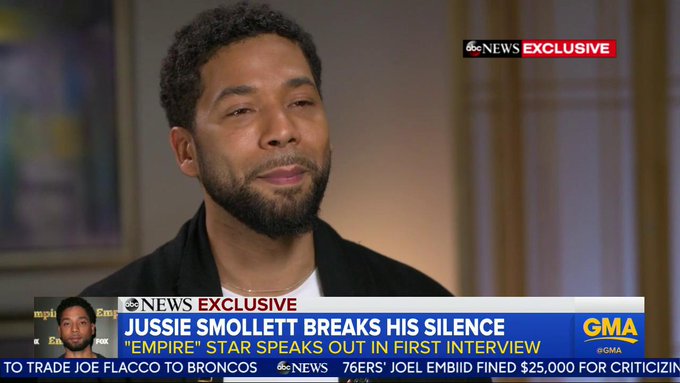 “Police have identified the men only as two Nigerian brothers,” reads Guglielmi’s update. “Police have been questioning them since they were picked up by officers at Chicago’s O’Hare International Airport on Wednesday after returning to the city from Nigeria. On Thursday, police served a search warrant at their home.”

February 16: CPD sources suggest that Smollett may have orchestrated the attack
Two law-enforcement sources tell CNN that CPD believes Smollett may have paid the two men, who are now cooperating with the police, to stage the attack against him. According to the sources, CPD has records of the two released suspects purchasing the rope that was tied around Smollett’s neck.

On Sunday, February 18, senators Kamala Harris and Cory Booker, both of whom initially condemned the attack, individually said they were reserving judgment, as details are still unfolding. “It’s something we should all take seriously whenever anyone alleges that kind of behavior, but there should be an investigation,” Harris said.

February 18: Smollett’s attorneys say they will “keep an active dialogue” with CPD
While CPD says that Smollett is not a suspect at this time, the police department tells his legal team that they want to speak with him again about the night of January 29. Per Smollett’s attorneys, he denies that he had anything to do with the attack.

February 19: Smollett is cut from Empire episodes
Amid conflicting reports about the case, sources tell Deadline that Empire has slashed the yet-to-be-filmed scenes in which Smollett was set to appear. Meanwhile, CPD is still requesting that Smollett submit to an interview, but the actor’s attorneys have not yet indicated when — if ever — he will be willing to speak with police.

Later in the evening, two sources with knowledge of the investigation tell CBS Chicago that the Osundairo brothers are claiming that Smollett sent himself the racist letter that arrived at the Empire set; they also say that Smollett staged the attack after the letter didn’t spark the outcry he sought.

Hours later, Police Superintendent Eddie Johnson holds a press briefing, where he essentially confirms all the details that anonymous sources have been leaking to the media: that Smollett orchestrated the attack because he was dissatisfied with his Empire salary on the TV series, and that he sent the threatening letter to himself.

March 8: Smollett is indicted
A Cook County grand jury indicts Smollett on 16 felony counts of disorderly conduct, which one of his lawyers calls “prosecutorial overkill.”

March 14: Smollett pleads not guilty
At the conclusion of the arraignment hearing, the court decides that Smollett will make his next appearance on April 17.

March 26: All criminal charges are dropped
Just over two months after the alleged hate crime, Smollett emerges from an “emergency court appearance” with shocking news: the prosecution has decided to drop all criminal charges against him; in turn, he will forfeit his bond and perform community service.

“Today, all criminal charges against Jussie Smollett were dropped and his record has been wiped clean of the filing of this tragic complaint against him,” reads a statement from Smollett’s lawyers.    [FWIW, according to a source close to Smollett, the prosecution’s case against the actor “disintegrated.” And, as of this morning, the ChicagoSun-Times reports that records have been sealed, and the case has been expunged from Smollett’s record.]

April 11: Chicago sues Smollett
In state court, the city of Chicago sues Smollett, accusing him of orchestrating a fake hate crime and lying to law enforcement. “Defendant made this report to the CPD officers despite knowing that the purported attack was not for racist or homophobic motives,” reads the lawsuit from the city, which seeking more than $130,000 to cover the cost of the police investigation.”

Inspector General Patrick Blanchard reveals he’ll comply with Foxx’ letter April 11 to Cook County Board President Toni Preckwinkle, county commissioners for his office to investigate her handling of the case.

Whew, and now the very latest —

Smollett all but vanished from public view for almost a year, not even posting to social media. Now he’s back in the spotlight after a grand jury indicted him for a second time on charges of lying to the police.

He faces six felony counts of disorderly conduct stemming from four separate false reports that he gave to police.

Smollett’s spent the past year fighting with the city of Chicago, which sued him in an attempt to recover more than $130,000 in overtime. His attorneys have said the city should not be allowed to recover costs from Smollett because it accepted $10,000 from the actor “as payment in full in connection with the dismissal of the charges against him.”

Smollett’s due to appear in court February 24.

We heard from both sides of certain 2020's crim justice reform issues last Monday. Below are a couple of samples of the pros and cons of parole reform, one of the many controversial reforms proposed nationwide.After that,  I've included an example of what reformers must consider when proposing and … END_OF_DOCUMENT_TOKEN_TO_BE_REPLACED

As you may know from a previous blog, I've been working on a book about the crimes and havoc committed by some people I knew with the Dark Triad personalities of psychopathy, narcissism, and Machiavellianism. Here's a Dark Triad test that's available on line. I can't attest to its reliability … END_OF_DOCUMENT_TOKEN_TO_BE_REPLACED

I've blogged a bit here and there regarding celebs and their ability to escape justice. So, it's fitting to highlight the way some engage in injustice as a "celebrity bully." But you ask, who needs another blog about a celebrity bully or a celeb who was bullied as a kid?  Well, if the bullying's … END_OF_DOCUMENT_TOKEN_TO_BE_REPLACED

Bullies come in all sorts of guises - from deceptively lightweight cyberbullies to the heavyweight Vladimir Putins and Xi Jinping's of this world. My friend and guest blogger today, Alain Gunn, has thought through the ways of how to respond to all sorts of bullies. Here's his essay on … END_OF_DOCUMENT_TOKEN_TO_BE_REPLACED

I've had a lifelong interest in discrimination and birth-defects stemming from being bullied for my once-nasal cleft-palate speech. Hence I was interested when college classmate Alain Gunn wrote The Titanium Rib. The Discrimination Angle The book is about a device that allows infants born with … END_OF_DOCUMENT_TOKEN_TO_BE_REPLACED