I’m disturbed and saddened that discrimination and/or mental illness has taken a serious toll on a bullying victim I’ve featured in prior posts.
Ex-NFLer Jonathan Martin graduated from Harvard-Westlake prep school in L.A. and then Stanford. He joined the Miami Dolphins in 2012. But during his 2nd year with Miami, he became the center of a scandal involving harassment and bullying on the part of his teammates Richie Incognito and Mike Pouncey.

Things do get fuzzed up and complicated in life as I noted in several other posts about Martin. But I’m afraid a victim is turning into a potential offender. Martin’s latest words are chilling. He wrote, “When you’re a bully victim & a coward, your options are suicide, or revenge.” (These are the words of an Instagram text posted to Martin’s verified account.)

The statements I’ve italicized below in a recent TMZ article also suggest that Martin has begun to segue into a villain. This is not surprising, tho. Martin’s been a victim of racial discrimination over the years. However, I’d guess that depression—or another kind of mental illness—is both a partial  cause and effect of the discrimination and bullying and he’s suffered. 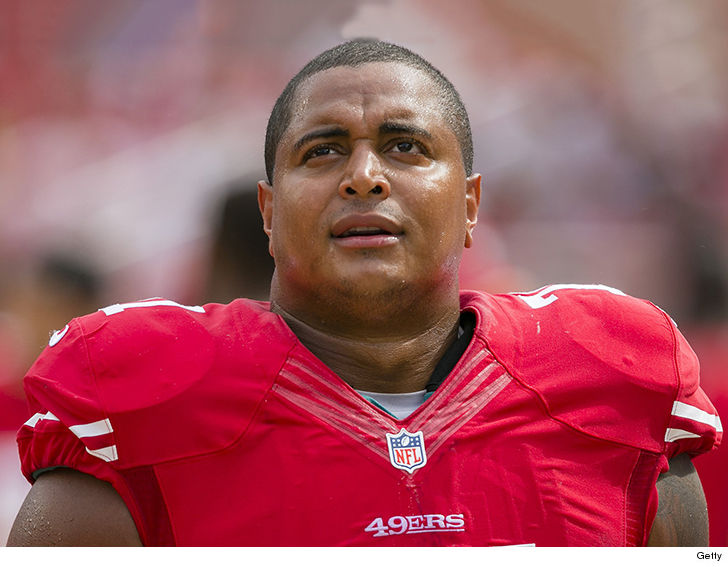 Martin playing for my team, the 49ers.

“New disturbing details in the Jonathan Martin case … we’ve learned he was arrested with a cache of weapons including a loaded shotgun, knife and an ax — and had been threatening classmates for years. 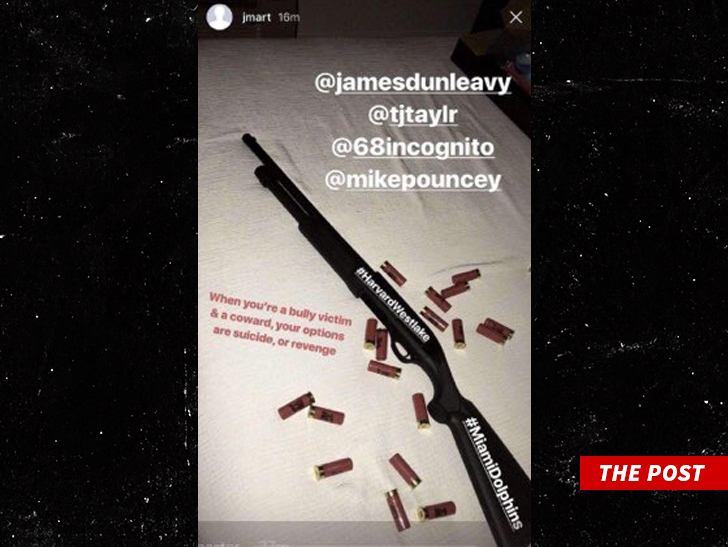 Discrimination or mental illness. Martin’s post to those who “bullied” him.

Officials say they found Martin after getting a call about a “suicidal male with a gun” at a hospital in Glendale, CA.

He was placed on a 72-hour psychiatric hold because officials believed he was a possible danger to himself and others.

They searched his car and found a loaded 12-gauge shotgun, a large knife, an ax and a cell phone. A second shotgun was found at his parents’ home.

Officials spoke with Martin’s girlfriend who said he’d been angry and depressed since she met him, but over the past month started making suicidal statements.

The GF says Martin had also been “writing on the walls” of his home.

Investigators spoke with the two former high school classmates Martin tagged in his cryptic IG post who said Martin had been sending them disturbing Facebook messages starting in 2016.

“And I blame you above all. You’ll get yours, eventually — I have already paid my price for being a bad person. I wish you nothing but the worst. Best, Jonathan Martin.”

He sent a second message to the same classmate that said, “You’re a bad person. You irreparably damaged people’s lives. And you will be exposed publicly. If there is anything else I accomplish in life, it will be making sure you are outed and shamed for who you are.”

Martin followed up with a 3rd message that had similar language.

The classmate says Martin apologized in August 2016 and it sounded like everything was cool. Clearly, it was not.

One other note … cops say they learned Martin had purchased one shotgun right after he sent the Facebook messages and another shotgun 13 days before the Instagram post.”

Another report on Martin… and possible racial discrimination.

“Former NFL player and Harvard-Westlake alumnus Jonathan Martin was taken into custody Friday in connection with an Instagram post that displayed a shotgun and referenced the school by name, a source told the L.A.Times.

A picture of the weapon with the words Harvard Westlake written across the barrel triggered the school’s closure on Friday, according to three sources.

The image, which referenced revenge and suicide as the only options for a victim of bullying, was posted to a verified Instagram account belonging to Martin, the former Miami Dolphins’ offensive lineman who accused teammates of bullying in 2013.

The post on Martin’s page led Harvard-Westlake officials to close the school’s campuses in Studio City and Beverly Crest, the sources said. …

In a message sent to students Friday morning, school officials said they were made aware of a “disturbing social media post that mentioned Harvard-Westlake by name” late Thursday night.

‘The safety of our students, faculty, and staff is always our primary concern. So, out of an abundance of caution, we made the decision to close school today,’ the email read. ‘The school’s private security team is working with the Los Angeles Police Department, which is present on both campuses. With these precautions in place, we believe there is no imminent threat to our campuses or our school community.’ …

Harvard-Westlake school CLOSED today for security risk. Students received an message through the school’s Emergency Notificiation System at 7:14 a.m. There are police on campus.

[Martin has] also said he had been uncomfortable at Harvard-Westlake as “one of just a handful of minorities” on the campus.

‘You learn to tone down your size & blackness by becoming shy, introverted, friendly, so you won’t scare the little rich white kids or their parents,” he wrote in 2015. “Neither black nor white people accept you because they don’t understand you. It takes away from your self-confidence, your self-worth, your sanity.'”

Your thoughts about Martin, depression, and discrimination?

Surely you have opinions about these troubling events? A series of threats sparked police responses at Southern California schools just before Martin’s troubles. And all of this on the heels of a gunman killing 17 people at a Parkland, Fla. high school.

I’ve been writing about psychopaths since 2013, and I’m getting renewed appreciation for the terror many of the more violent ones inflict on individuals and communities. Before interstates, my mom used to drive me from Boise, Idaho through Spokane, Washington to Seattle for cleft-palate … END_OF_DOCUMENT_TOKEN_TO_BE_REPLACED

White privilege and BLM collided a couple of days ago. President Donald Trump's home and signature building, Trump Tower, got tagged. None other than Democrat Mayor of New York City, Bill deBlasio (tall guy in blue shirt below), helped paint Black Lives Matter on the street in front of Trump's … END_OF_DOCUMENT_TOKEN_TO_BE_REPLACED

As I've noted in prior blogs, there's all manner of fraud abroad in the land.* True crime fans and writers might want to bone up on  car repair fraud. Most  of us lucky enough to own vehicles have experienced such fraud. Thus many readers can relate to it. And car repair fraud sometimes has a … END_OF_DOCUMENT_TOKEN_TO_BE_REPLACED