How well I remember the days leading up to what seemed like just another incident of conservative urban police officials not understanding evolving radical beliefs and ideologies of the time. I’d just finished grad school in West Philadelphia, but still got  MOVE  updates from friends I’d visited in the Powelton Village area in the 1970s.

MOVE  isn’t an acronym. It’s just the name of a Panther-esque revolutionary group that was anti-govt, anti-corp, and anti-tech. Called ’emselves “anarcho-primitivists.”

The incident covered in the HBO documentary—being mostly live-streamed around the country— happened at a Powelton Village house at 311 N 33rd Street. This location isn’t far from 3411 Race Street where Ira Einhorn, the ‘Mayor” of Powelton and an acquaintance of mine, killed his girlfriend.

What was etched deeply in my mind – as a new criminology professor back then focusing on the study of police behavior – was  not the eviction attempt featured in the HBO film. It was horrible. Somehow a cop died by a shot to the back of his neck. And 16 police officers and firefighters sustained injures from a shootout.

No, what’s even more indelible is the unconscionable bombing of the MOVE homes in the ’80s which grew out of the 1978 incident dealt with in the film.

Oddly, the bombing gets little attention in the movie. So, to remedy that, here’s a thumbnail of what happened in the bombing. The resulting apocalyptic firestorm forced Philly’s black mayor and black fire chief to resign. Officials are still apologizing after decades of angst over the botched   tactics by public safety officials..

The 1985 MOVE bombing occurred May 13, 1985, when the Philly Police Dept bombed a residential home occupied by the black militant  MOVE group,  and the Philly Fire Dept let the subsequent fire burn out of control.

All this followed a standoff and firefight. In 1985,  Mayor Wilson Goode and police commissioner Gregore J. Sambor had classified MOVE as a terrorist organization. Police obtained arrest warrants against MOVE members for various crimes. The standoff started after  police evacuated nearby houses and attempted to serve eviction notices and execute arrest warrants.

Eleven people in the house, including 5 children, died in the fire, and 65 homes in the neighborhood were destroyed.

One of the 2 MOVE survivors from the fire, claimed   police fired at people escaping the fire. The Philadelphia Commission found that Police and Fire were negligent, but no criminal charges were filed.

That’s not simply a matter of perfect timing, but rather a shameful reminder that works of art about racial injustice as it relates to law enforcement and, ironically, the justice system in this country have perennial relevance.

At the heart of this feature is a series of violent incidents that took place in 1978 West Philadelphia targeting the residence of John Africa’s revolutionary organization MOVE, which preached a return to a natural lifestyle and renounced imposed norms and values.

Members symbolically took the last name Africa to denote they were a family.

The city’s efforts to evict MOVE, after deeming them a dangerous cult, culminated in a shootout leaving one officer dead. 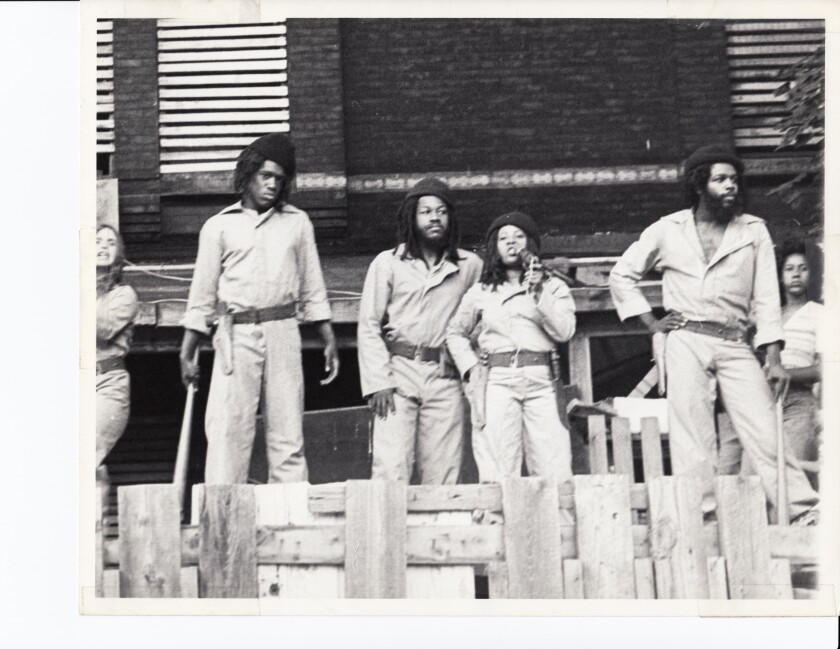 MOVE members in  “40 Years a Prisoner.HBO

The official story claimed the bullet came from those inside the property, and while most evidence was destroyed, 9 Black men and women wound up charged with 3rd degree murder.

(In 1985, after another dramatic confrontation, police dropped a bomb on MOVE headquarters, killing 11 people and demolishing 2 square blocks of homes.)

Oliver handles the ire-inducing true story by intermingling a historical portion built from archival material, news coverage, and hindsight interviews with those who lived it first-hand; and Mike Africa Jr.’s zealous crusade to free his parents, both of whom have spent four decades behind bars for the MOVE case.

Ordinary but sufficiently effective in its execution, the film’s most resonant segments are those where the upstanding son reflects on his torn family and a rotten system in which paroling alleged offenders even after so much time is seen as an affront to the toxic institutional loyalty to police.

Saying the quiet part out loud, some of the white subjects interviewed reveal their biases as they express their present opinions on the past events and the Black people affected, calling them “vulgar” and using other pejorative adjectives.

Footage of Frank Rizzo, Philadelphia’s mayor [around this…] —time and a predecessor to President Trump’s grotesque arrogance, proves that such racist ideology came, as it still does, from the top down.

While “40 Years a Prisoner” concludes on a bittersweet yet healing epilogue—seeing Rizzo furiously blaming the media for capturing and divulging images of monstrous cops brutalizing a MOVE member  broadens our understanding that the oppressors’ scapegoating and dehumanizing tactics are not new but tried, tested, and recycled.”

What do you think, whether or not you’ve seen ’40 Years a Prisoner?’

I've had a lifelong interest in discrimination and birth-defects stemming from being bullied for my once-nasal cleft-palate speech. Hence I was interested when college classmate Alain Gunn wrote The Titanium Rib. The Discrimination Angle The book is about a device that allows infants born with … END_OF_DOCUMENT_TOKEN_TO_BE_REPLACED

As a '60s liberal, I swallowed whole  the  storyline about our new president, John F. Kennedy. If appearances could be trusted, he was young, vigorous, and courageous (rescuing a fellow sailor in WWII.) Just the man to usher  in the so-called Camelot years. I was a high school junior with a … END_OF_DOCUMENT_TOKEN_TO_BE_REPLACED

I managed to catch the  2nd episode of the "Clarice" series recently. It channeled the Waco cult situation, also known as  the Waco, Texas massacre.  That was the controversial law enforcement siege of a compound that belonged to the Branch Davidian religious cult. In the 2nd  episode,  Clarice … END_OF_DOCUMENT_TOKEN_TO_BE_REPLACED

As part of our series on Popular Culture and True Crime, our final tutorial looks at why women seem such devoted true crime fans. Tutorials I and II dealt with the fascination with serial killer trading cards and murderabilia (the collection of mementos), respectively. While I've … END_OF_DOCUMENT_TOKEN_TO_BE_REPLACED

In a recent blog (go here), I discussed the furor created by the creation of serial killer trading cards* back in 1992. A similar controversy has erupted over the growing practice of collecting artifacts and even bits of hair from those involved in serial … END_OF_DOCUMENT_TOKEN_TO_BE_REPLACED